Though it didn’t make it to market until February of 1970, the second-generation 1970½ Camaro would be in production 12 years. The second-generation Camaro’s styling was inspired by Ferrari and was also bigger, heavier and no longer available as a convertible. And as the 1970s progressed, it would grow less powerful, succumbing to the pressures of tightening emissions regulations and a fuel crisis.

Still based on the Nova, the new Camaro was engineered much like its predecessor in that it still used a unibody structure with a front subframe, leaf springs in the back and A-arms up front for suspension. Those A-arms were freshly designed and the steering gear moved from the back to the front of the front axle, but otherwise the basic mechanical pieces were familiar.

Also familiar were most of the engines. The 155-horsepower 250-cubic-inch six was now the Camaro’s base engine, followed by the who-cares 200-horsepower 307, the lowliest of V8 offerings. A 250-horsepower two-barrel 350 effectively replaced the 327. Order the SS package and the 350 earned a four-barrel carb and additional compression to reach 300 horsepower. Moreover, SS buyers could pay even more and get a 350- or 375-horsepower 396 big-block V8.

As before, the Camaro was offered with Rally Sport or Super Sport equipment or both. The Rally Sport package featured a unique front-end appearance with a split front bumper and a center grille cavity encircled in rubber. The SS again had heavier-duty suspension and the “SS” logos.

The star 1970½ Camaro was again the Z/28, now powered by a 360-horsepower high-compression “LT-1” 350. Unlike the high-revving 302 used in the first Z/28s, the LT-1 was easy-going in everyday traffic, still revved with enthusiasm and was now available with an automatic transmission. Car and Driver‘s test had the ’70½ Z/28 ripping to 60 mph in 5.8 seconds and running through the quarter-mile in 14.2 seconds at a full 100.3 mph, though the drivers still found it lacking in bottom-end power.

But the glory days of the LT-1 would last just that one year. With emissions regulations growing tougher, GM dropped compression ratios across the board for 1971 and also adopted “net” alongside “gross” power ratings for its engines (by ’72, all engines were only net rated). For the 250-cubic inch inline six, the power rating dropped from 155-gross to 110-net horsepower. For the LT-1, the drop was a 30-horsepower plunge down to a 330 horsepower gross and 275 horsepower net. Otherwise, the ’71 barely changed from the ’70½ model; high-back bucket seats were new, and the rear spoiler on Z/28s was now a larger three-piece unit. Camaro would not have a 300 horsepower engine for over 25 years until the 1996 model. 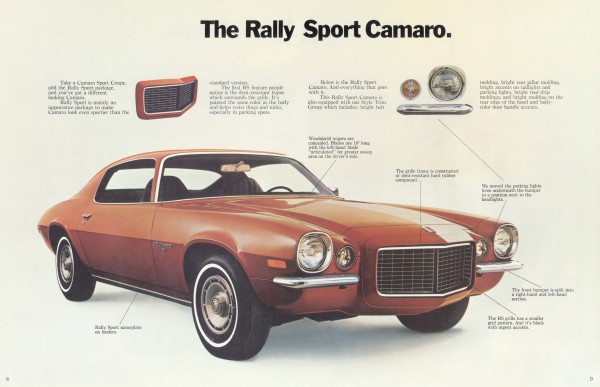 The 1972 Camaro changed mostly in the engine bay where the horsepower devastation continued. The LT-1 could now only poke out 255 horsepower (net) and the most robust big-block (still called a 396, but in reality a 402) was making just 240 net horsepower.

In 1973 the bumpers were slightly revised and the horsepower drain continued with the base six now making an utterly lame 100 net horsepower and the L82 only 245. The big-block was off the option sheet altogether. In place of the Super Sport was the “Type-LT” Camaro, which bundled a slew of luxury options into one cohesive package.

To meet new bumper regulations, the 1974 Camaro was redesigned with thick aluminum bumpers front and rear. The one-and-only grille (the Rally Sport option vanished) was now shovel-shaped and the rear taillights wrapped into the fenders. But there were no changes to the available engines and trim levels.

With unbelievable shortsightedness, Chevy killed the Z/28 and pared the engine selection down to just three catalyst-equipped lumps for 1975 — the 250-cubic-inch six now rated at 105 horsepower, a two-barrel 350 V8 making a pathetic 145 horsepower and a four-barrel version of the same engine rated at a meager 155 horsepower.

Distinguishing the ’75 from ’74 was a new rear window that wrapped down into the roof sail panels. Also new for ’75 was a “Rally Sport” package that consisted of two-tone paint and some tape stripes.

For no apparent reason, the ’75 Camaro sold well, so there were few changes to the 1976 model. An aluminum panel between the taillights was now used on the Type-LT, power brakes were finally standard and cruise control was a new option. The two-barrel 350 was killed in favor of an even-crummier two-barrel 305 producing 140 horsepower while the four-barrel 350 now whacked out a still-inexcusable 165 horsepower.

When the 1977 Camaro appeared, there were again few changes (intermittent wipers anyone?), but in the middle of the year, the Z/28 returned as a separate model whose concentration was now on handling and appearance. And the new Z/28 did handle well, even if it only had 170 horsepower aboard from the same 350 four-barrel V8 offered in other Camaros (up 5 horsepower from ’76). The ’77 Camaro was thoroughly lackluster, but with Ford foisting the hideous Mustang II upon America, for the first time, more Camaros (198,755) were sold than Mustangs (161,654).

Daring to mess (however lightly) with success, Chevrolet equipped the 1978 Camaro with a new nose that put the big bumpers under soft plastic. Five models were now offered (sport coupe, Rally Sport, Type-LT, Type-LT Rally Sport and Z/28), and translucent T-tops were a new option. The Z/28’s full-disco body package (with front fender vents and a fake hoodscoop) was supported in ’78 with a revised version of the 350 V8 now rated at a better-but-still-weak 185 horsepower.

Though almost a carryover from ’78, the 1979 Camaro would prove the most popular one yet. The Type-LT vanished in favor of a new trim level called Berlinetta, but the engines were all unchanged, even though power ratings were rattled a bit in contending with emissions requirements (Z/28 output dropped to 175 horsepower for 49-state cars). The most substantial change to the ’79 Camaro was a new instrument panel with more contemporary instrumentation and better control placement. Chevy sold a stunning 282,571 Camaros during the 1979 model year — a number it would never top.

Looking to improve fuel economy, Chevy mangled the Camaro’s engine lineup for 1980 while leaving the rest of the car pretty much alone. A new 115-horsepower 229-cubic-inch V6 (basically a small-block V8 with a pair of cylinders hacked off) — or, in California, a 110-horsepower 231-cubic-inch V6 replaced the ancient inline six, and a new 267-cubic-inch two-barrel version of the small-block V8 debuted, rated at a laughable 120 horsepower. On the positive side, output of the Z/28’s 350 grew to 190 horsepower, except in California where buyers got a 155-horsepower 305-cubic-inch V8 mated to a mandatory three-speed automatic. Caught in a fuel crisis, Camaro sales nose-dived to 152,005 during the 1980 model year.

The antiquated platform of the second-generation Camaro had run its course by the 1981 model year. With a new engine control computer aboard, all engines were now certified for all 50 states, but output on the Z/28’s 350 dropped to 175 horsepower. The Rally Sport died (again) and the ’81 Camaro lineup consisted of three well-defined models: base sport coupe, Berlinetta and Z/28. Those three model names would survive to see 1982, but not much else.