Third-generation Camaros were the first built without front subframes or leaf-spring rear suspensions. Now the front end was held up with a modified MacPherson strut system, and the hind end relied on a long torque arm and coil springs. These were also the first Camaros with factory fuel injection, four-speed automatic transmissions, five-speed manual transmissions, four-cylinder engines, 16-inch wheels and hatchback bodies. In January 1982, the Camaro was, for the first time since 1967, truly all-new and slightly smaller.

But the 1982 engine selection was hardly scintillating. Base sport coupes started with a 90-horsepower version of GM’s lethargic 2.5-liter “Iron Duke” four and could be optioned up to a 112-horse 2.8-liter V6 (base engine in the Berlinetta) or a four-barrel carbureted 5.0-liter (305-cubic-inch) small-block V8 rated at 145 horsepower. That V8 was the Z28’s base powerplant; buyers could opt for a Z28 “Cross-Fire Injection” (throttle body-injected) version producing 165 horsepower. The carbureted V8 could be had with either a three-speed automatic or four-speed manual, but the injected engine was automatic only. 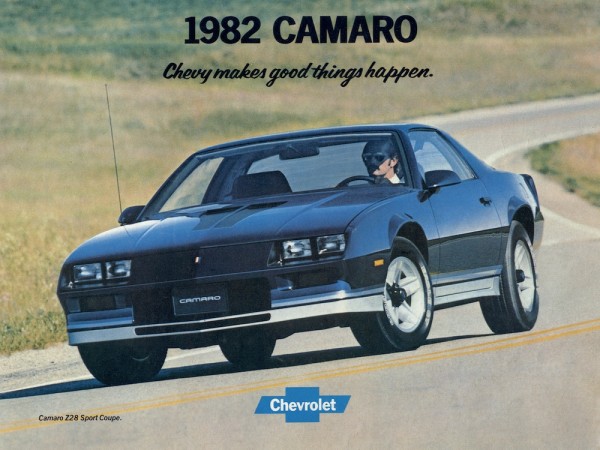 A Camaro paced the Indianapolis 500 again in 1982, and the silver and blue replicas of that car are probably the most attractive of the ’82s. However, the T-top Z28 that actually paced the Memorial Day classic that year used a highly modified 350 (5.7-liter) V8 for motivation that wasn’t available to the general public. Kind of sad, really.

The three-tier Camaro lineup continued into 1983 with minimal visual differences. However the Z28 got a nice power bump with the introduction of the “L69” engine option. With a Corvette-spec camshaft, revised exhaust and a healthy four-barrel carb, the 5.0-liter L69 “H.O.” V8 was rated at 190 horsepower and could be backed by a new five-speed manual transmission.

For 1984, availability of the L69 improved on Z28s (the junky Cross-Fire engine died) and the four-speed “700R4” automatic was adopted by most Camaro models. Because anything digital was, of course, good, the Berlinetta sprouted a funkadelic digital instrument panel and overhead console this year, as well. The instrumentation was probably more entertaining than the V6 that powered most Berlinettas.

The great leap forward in third-generation Camaro performance came with the introduction of the 1985 IROC-Z, named after the International Race of Champions, which was contested with Camaros. The IROC featured big 16-inch five-spoke wheels and unique graphics. Carbureted versions of the 5.0-liter small-block V8 were still available, but the big improvement came with the fitment of Tuned Port Injection (TPI) to that engine to produce a flexible 215 horsepower. Sadly, the TPI engine could only be had with the four-speed automatic (in either the IROC or the regular Z28).

Beneath the Z28, the sport coupe and Berlinetta blustered through 1985 unchanged, except for a new fuel-injected version of the 2.8-liter V6 that now pushed out 135 horsepower.

The 1986 Camaros were easy to spot because of the goofy blister fitted atop their rear hatches to accommodate the federally mandated center high-mounted stop light (CHMSL). Beyond that, there was a new exhaust system for non-Z28 cars and a new basecoat/clearcoat two-stage paint system.

Big engines returned to the Camaro for 1987 with the good old 350 (5.7-liter) V8 making its way into IROC-Zs as an option. Capped with the TPI system, the 5.7 was rated at a full 225 horsepower — the highest horsepower in a Camaro in 13 years and with vastly better drivability. While the TPI 5.7 came only with the four-speed automatic, the TPI 5.0 liter was finally available with the five-speed manual.

Equally good news was the comeback of the Camaro convertible — the first Camaro convertible since 1969 — and the consignment of the four-cylinder engine to a well-deserved eternity in junkyard Hell. The high-output carbureted 5.0-liter V8 also disappeared, and a new 165 horsepower carbureted 5.0-liter V8 became the standard Z28 engine. Also gone from the ’87 Camaro line were the Berlinetta (replaced with an “LT” option package), and, on any Camaro with a rear spoiler, that ugly CHMSL housing on the rear glass. The CHMSL was instead built into the spoiler and Chevy would simplify its own production for 1988 by making the rear spoiler standard on all Camaros.

So that brake light blister was gone entirely from the 1988 Camaro, but so was the Z28. Since Chevy had firmly established the IROC name, all high-performance ’88 Camaros became IROCs. Base ’88 Camaros, meanwhile, inherited the elegant 15-inch five-spoke wheels from the Z28, as well as the Z28’s lower body skirting. Also, the Z28’s 5.0-liter V8 was now optional on the sport coupe; it gained a throttle body fuel-injection system to make 170 horsepower.

The rarest and most intriguing ’88 Camaro was the 1LE road racing package optional on the IROCs with both the 5.0- and 5.7-liter TPI engines. Featuring oversize disc brakes, an aluminum driveshaft and a well-tweaked suspension, the 1LE was built to win showroom stock road races.

Proving that no name is forever dead in the world of Camaros, the old “RS” (but not Rally Sport) designation returned for the 1989 model year. Looking much like an ’85 Z28, the RS was a basically a trim package atop the base sport coupe and was powered by either the V6 or a throttle-body-injected 5.0-liter V8. Although the 5.7 TPI V8 now boasted 240 horsepower, about the only way to tell ’89 IROCs from previous years is to look at the ignition key and see if has the “Pass-Key” theft deterrent resistor embedded in it.

The IROC breathed its last breath during the short 1990 model year, as Dodge picked up sponsorship of the International Race of Champions. The big changes that year were the growth of the base V6 from 2.8 to 3.1 liters, with a bump in output from 135 to 140 horsepower and the fitment of driver-side airbags to all models.

Chevy jump-started the 1991 model year by re-introducing the Z28 in the spring of 1990. Sure, the ’91 Z28 got a tall rear wing, new lower body cladding, new phony hood scoops and new five-spoke wheels, but it was otherwise still an IROC and now the top engine was a 245 horsepower 5.7-liter TPI V8. All other ’91 Camaros were pretty much ’90 Camaros with revised ground effects that featured fake air inlets.

Law enforcement got its own Camaro in 1991 with the introduction of the Camaro B4C pursuit vehicle. Basically, a B4C was a Z28 that was badged as an RS and equipped with most of the good stuff developed for the 1LE race package. Very few B4Cs were ever produced.

With an all-new Camaro coming for 1993, the 1992 model was barely changed from ’91. The big change was that they all sported a “25th Anniversary” badge on their instrument panels. Further, a $175 “Heritage Package” of stripes was offered for any ’92 Camaro.

It was time for another new Camaro.