The debut Camaro shared some mechanical parts with the 1968 Chevy II Nova. Almost 80 factory and 40 dealer options, including three main packages, were available.

The RS was an appearance package that included hidden headlights, revised taillights, RS badges, and exterior rocker trim. It was available on all models. 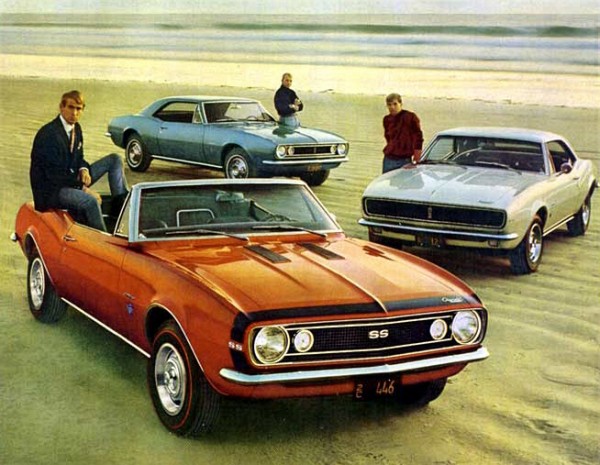 The SS included a 350 cu in (5.7 L) V8 engine and the L35 and L78 396 cu in (6.5 L) big-block V8’s were also available. The SS featured non-functional air inlets on the hood, special striping and SS badges on the grille, front fenders, gas cap, and horn button. It was possible to order both the SS and RS to receive a Camaro RS/SS. In 1967, a Camaro RS/SS convertible with a 396 engine paced the Indianapolis 500 race.

The Z/28 option code was introduced in December 1966 for the 1967 model year. This option package wasn’t mentioned in any sales literature, so it was unknown to most buyers. The Z/28 option required power front disc brakes and a Muncie 4-speed manual transmission. The Z/28 featured a 302 cu in (4.9 L) small-block V-8 engine, 3″ crankshaft with 4″ bore, an aluminum intake manifold, and a 4-barrel vacuum secondary Holly carburetor of 780CFM. The engine was designed specifically to race in the Trans Am series (which required engines smaller than 305 cu in (5 L) and public availability of the car. Advertised power of this engine was listed at 290 hp. This is an under-rated figure.

The origin of the Z/28 nameplate came from the RPO codes – RPO Z27 was for the Super Sport package, and RPO Z28, at the time, was the code for a Special Performance Package.

The Camaro’s standard drive train was a 230 cu in (3.8 L) straight-6 engine rated at 140 hp (104 kW) and backed by a Saginaw three-speed manual transmission. A four-speed manual was also available. The two-speed “Powerglide”automatic transmission was a popular option in 1967 and 1968 until the three-speed “Turbo Hydra-Matic 350” replaced it starting in 1969. The larger Turbo 400 three-speed was an option on L35 SS396 cars.