The fifth-generation Corvette was the most wholly new Corvette since the ’53. Not even the engine carried over from the C4, and the entire concept of how the car was built changed.

Unlike every previous Corvette that bolted its transmission directly behind the engine, the 1997 version split the transmission off and placed it in the back of the car between the rear wheels where its weight could be used to offset that of the engine in the front. This transaxle arrangement had been used before on cars like the Porsche 928, but it was a radical departure for the Corvette. 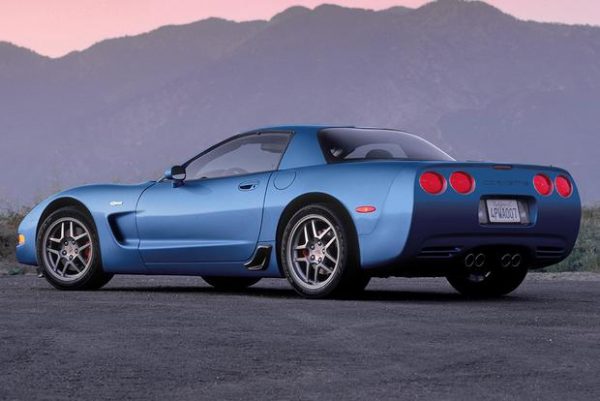 The suspension itself still used aluminum links and transverse leaf springs, but the wheels and tires were now 18-inchers in the back and 17s up front and there was no provision for a spare tire since all tires would be of run-flat design.

The new frame used large, hydroformed rails and a thick backbone for extra strength, while relying on engineered wood products to make up part of the floor. The hatchback coupe body (the only body offered during ’97) again evoked styling themes established in the previous two generations of Corvettes, though with reduced front and rear overhangs as the wheels moved out toward the corners of the car. Also, the clamshell hood was gone in favor of a less expensive conventional hood.

The C5’s engine was also completely new and unrelated to any previous Corvette V8. While still displacing a nominal 5.7 liters and using a single in-block camshaft to drive the two valves per cylinder via pushrods like the old small block, the C5’s “Gen III” “LS-1” was an all-new, all-aluminum design using all the latest production techniques. And its output was a satisfying 345 horsepower. The rear-mounted transmissions were either a version of the Borg-Warner T56 six-speed manual or Chevy’s own 4L60-E four-speed automatic in a new case for this application.

With so much power in such a capable chassis, the C5 Corvette was an instant sensation. “As if anyone doesn’t know it already, the new Corvette is unfathomably good,” wrote Motor Trend in one early comparison test. “Despite being the least expensive car gathered for the Decathlon, its 4.8-second clocking to 60 mph is as quick as the most expensive car’s and matches that Ferrari’s quarter-mile elapsed time as well. On top of that, it’s roomy, easy to get in and out of and forgiving of almost any boneheaded input from the driver. In its 45 years history, the Corvette has never before been so excellent in so many ways relative to its competition. It’s a colossal achievement.”

Wisely not messing with something so fundamentally wonderful, Chevy merely expanded the C5 Corvette range for 1998 by adding a convertible model. And for the first time since ’62, this convertible included a trunk that was accessible from outside the car. Magnesium wheels were also offered as an option this year for those seeking the ultimate in unsprung weight savings. Again, a Corvette convertible paced the Indianapolis 500 and, again, Chevrolet offered replicas to the public — this time in bluish purple.

A fixed roof coupe, lighter in weight than either the hatchback coupe or convertible, was added to the 1999 Corvette lineup. The intent behind the fixed roof coupe was hinted at by the fact that it could only be had with the six-speed manual transmission. Otherwise the most significant addition to the ’99 Corvette options list was a surprisingly effective head-up display unit that projected major information on the windshield in front of the driver.

Gone from the 2000 Corvette was the passenger-side door lock cylinder as Chevy concluded that the keyless entry system made it unnecessary. Otherwise, all that was left to be excited about were two new exterior colors (Millennium Yellow and Dark Bowling Green Metallic), a new interior color (Torch Red) and new five-spoke forged aluminum wheels.

The real reason for the fixed roof coupe became obvious with the 2001 model year as Chevrolet brought forth the ferocious Z06 Corvette that year. Running a revised high-compression, low-reciprocating-weight version of the LS1 dubbed the LS6, the Z06 went into battle with 385 horsepower, shooting its exhaust out a titanium system. The Z06 also got a special FE4 suspension system that was stiffer and had thicker anti-sway bars than other C5s, special lightweight wheels and bigger, lighter, more aggressive Goodyear tires that weren’t run-flat in design. In just about every way, the Z06 either matched or exceeded the vaunted ZR-1’s performance and did so for far less money.

Regular C5 owners weren’t completely overlooked during 2001, however, with the LS1 seeing its output increase from 345 to 350 horsepower. It was also an even more flexible and torque-rich engine.

As good as the ’01 ZO6 was, the 2002 ZO6 was even better, as output of the LS6 jumped to an astounding 405 horsepower — matching the highest output of the ZR-1. Furthermore, the Z06’s suspension was retuned to perform even better than before. On the LS1-powered side of the Corvette equation, there were revisions to the sound systems and a new Electron Blue paint color.

Chevrolet acknowledged the 50th anniversary of the Corvette for 2003 with, naturally, a 50th Anniversary Edition Corvette. Available either as an LS1-powered hatchback coupe or convertible, the 50th Anniversary car got special deep red paint, a new Magnetic Selective Ride Control system and a bunch of logos. Of course, it was also used to pace the ’03 edition of the Indianapolis 500. Other Corvettes got more standard equipment, including a power passenger seat and dual-zone climate control system. The Z06 was basically unchanged.

The C5 entered the 2004 model year with everyone fully aware that this would be the last year for this beloved Corvette. There were commemorative editions of all three models, with the Z06 featuring a carbon-fiber hood and revised shock valving. If there was ever a car that didn’t seem to need changes, this was it.